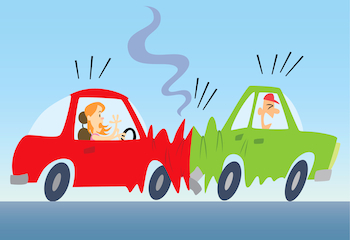 In November 2002 a 55 year old woman suffered a car accident on the way home from work. She was sitting in the rear of a stationary car with her head turned slightly to the right. The car was rear ended and she had to have the next three weeks off work as she was experiencing neck pain and severe headaches. Her headaches were felt around her forehead on both sides and she had some light-headedness. She saw a physiotherapist three times a week for the next six months.

In May 2003 this woman started to feel severe pain around her right shoulder blade and pain into her right arm. She reported a tingling sensation in the 4th and 5th fingers and numbness in her right index finger. She was unable to turn her head fully to the right and was starting to get some lower back pain and pain in her right hip. She was still suffering from neck pain and headaches.

She presented to this clinic seven months after the accident. On examination this woman could not turn her neck to the right hand side and felt pain in her arm whenever she tried. The examination revealed that she had inflammation of the facet joints of C23, C67, T23 and the rib on the right at the same level, and L5S1. She had limited movement of her neck in all directions together with neck pain and pain in her right arm on most movements.

X rays and CT scans revealed disc degeneration at C45, C56 and C67 with bony narrowing of the foramina where the nerves exit the spine at C56. There were large bone spurs narrowing the spinal canal, the lateral recesses and the exit foramina on both sides. She had recently been told that an operation was needed to remove one of the spurs in her neck.

Chiropractic manipulation was initially performed on the joints below the level of the degeneration, at C67 and some soft tissue massage was also utilised. Her treatments were initially 2-3 days apart and after 6 visits this patient reported feeling pain free for the first time in 7 months. After 11 visits she found that the pins and needles and numbness also went away and that she did not feel the need to have an operation to remove the spur in her neck. Her treatments at this stage were only once per month and incorporated treatment for her upper neck pain and headaches which also subsided quickly.

This woman has continued her chiropractic care for the purpose of good spinal health and to prevent any recurrence of symptoms that may arise due to the degeneration in the lower neck. As of her most recent visit in May 2010 she continues to do well without any of the symptoms that she had sustained from the car accident.

It is important to note that having degeneration or arthritis anywhere in your spine is not necessarily a contra indication to having chiropractic treatment. In many cases the degeneration is not severe and can be successfully treated. In severe cases the arthritis is not the level of the spine causing the pain. It is often a level above or below the level of the arthritis responsible for the symptoms as the degenerated level is simply not moving at all and not capable of being strained. This is unlike the levels above and below that are now working harder than they should be to compensate for the arthritis. It is a common experience for a patient to present with lower back pain without any evidence of arthritis in their lower back but have severe arthritis in the neck without any neck pain.

In summary arthritis should give you a sense of stiffness or a lack of ability to move fully in one or more directions but it shouldn’t be painful. If there is pain associated with spinal arthritis then the painful joints can be treated with manipulation and the patient returned to a pain free state. Joints can only be inflammed if they still have some function left in them.